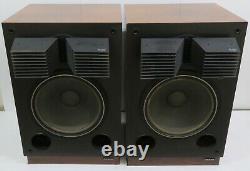 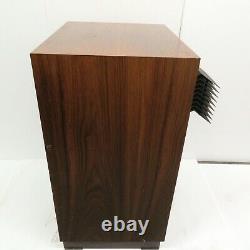 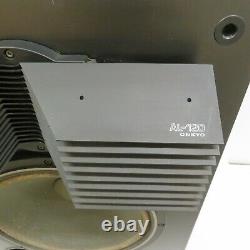 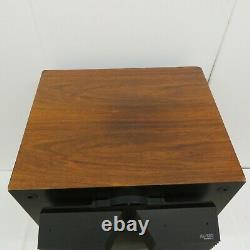 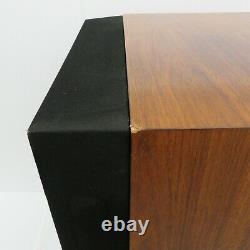 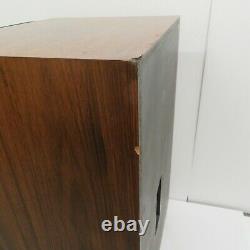 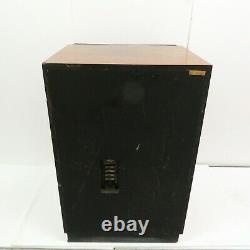 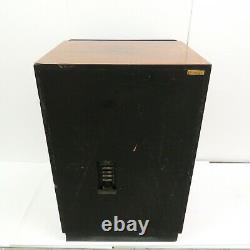 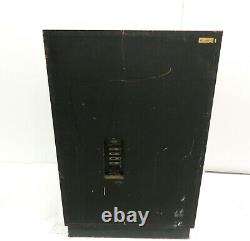 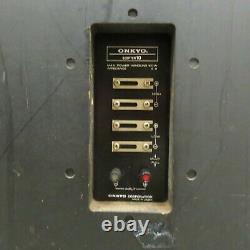 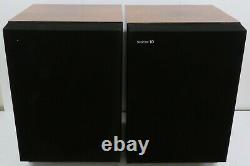 Tested and fully operational, the top layer of the foam surround has begun to perish but the middle layers are both fine The Scepter badge is missing and there is some damage to the rear feet of one speaker (see images). 2 ways, 2 speaker bass-reflex scheme, and a floor type. For low-pass: 38cm cone type (W-3810A). For high regions: Horn type (TW-1206A+ lens AL-120). Width 560x height 869x depth of 522mm.

The abundance of a bass, and the large-sized floor type speaker system designed aiming at the forcible bright tone. A 38cm large-diameter Woofer unit is adopted as a low-pass play. A multi-corrugation cone strong against the Dainyuu power is adopted, and it is driving with the long voice coil of a special heat resistance design with big 78phimm and aperture.

Moreover, cone paper hangs by adopting the reinforced ring of aluminium as the joint of cone paper and a voice coil, a bell oscillation is prevented effectively, and an inside low-pass tone is felt refreshed. The 180x95x20mm magnet which secures the high flux density of 11000gauss is adopted as a magnetic circuit. H type is adopted as pole piece and the symmetric property of the magnetic-flux distribution is maintained. Furthermore, the higher-harmonic distortion by near fh generated by electric-current distortion is reduced by equipping a copper short ring. Moreover, two sorts of urethane foam from which ester systems differ in the high layer and the physical characteristic of an ether system differs in a descendant is pasted together to an edge part by the ratio of 3:7, and also it is molding in the special form where density becomes small gradually to the frame side, from the cone paper side.

Thereby, linear flattery nature is demonstrated also to a motion of the intense cone at the time of a large swing, and the nonlinear distorted occurrence is suppressed to it. It excelled in thermal resistance and the intensity has adopted the butterfly damper using a high special thermal-resistance resin laminate as a damper.

The horn tweeter which combined the low short horn of the cut-off frequency with the driver unit which uses a titanium diaphragm is adopted as a mid-high-range part. The diaphragm is molding the super-thin foil of 20 microns in the shape of a dome. This diaphragm, the free edge structure of a polyester film using, and adoption of a double equaliser and the elongation of a high region conjointly, and transparency are improved. A horn is a short horn made from aluminium die-casting with a spread of cut-off 500Hz, and has realised high efficiency and an extensive directivity by using an acoustic lens together. 20mm Oregon pine plywood was adopted as the baffle board of an enclosure, and the chipboard of a needle-leaf tree is adopted as a side plate by sufficient board thickness. The mode selector which can choose three positions is carried. By a position 1, a Woofer and a tweeter are used positively and near a crossover is the pattern which became with some climax a little. By the position 2, the shoulder property and tweeter level of a Woofer near a crossover are set up become a flat as much as possible on the sound pressure frequency characteristic about relation of a Woofer and a tweeter. By the position 3, thickness was given to inside low-pass a little, and a little level of a tweeter is set up with some prevention. Estimated pallet size is: 120(H)x65(W)x100(D)cm 150kg. The item "Onkyo Scepter 10 stereo horn speakers ideal audio" is in sale since Wednesday, December 2, 2020. This item is in the category "Sound & Vision\Home Audio & HiFi Separates\Speakers & Subwoofers". The seller is "idealaudio_uk" and is located in Greater Manchester. This item can be shipped worldwide.